Top 10 Programming Languages to Learn in 2020 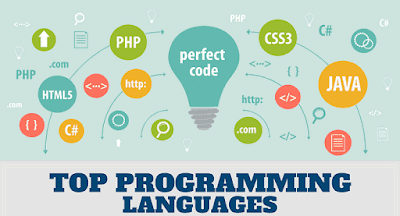 The most important skill to learn in today’s world is to know how to write a computer program. Today, computers have entered in almost every industry. Be it the autopilot in an aircraft or digital speedometer in your bike, computers in various forms surround us.
Computers are extremely useful for an organization to scale up well. Gone are the days of pen and paper. Today, in order to store and access your information, you absolutely need computers.

The programming and developer communities are emerging at a rate faster than ever before. Various new programming languages are coming up that are suited for different categories of developers (beginners, intermediate, and experts) as well as for different use cases (web application, mobile applications, game development, distributed system, etc). Let us take a look at best Programming Languages to learn in 2019 for a job and for future prospects.

Here’s a list of top 10 programming languages I’ll be covering in this blog:

Python is the fastest-growing general-purpose, high-level programming language with an emphasis on code readability. It has notable features like

It is also one of the most preferred languages in the fields of Data Science, Statistics, Analytics, ML and AI with R as its only real competition.

Created: Python language developed by Guido van Rossum. It was first released in 1991.

Allows you to scale even the most complex applications with ease

Python's database access layer is a bit underdeveloped and primitive.

Created: JavaScript was earlier called LiveScript when it first shipped in with Netscape Navigator 2.0 in September 1995. Later, it was renamed as a JavaScript.

JavaScript is relatively simple to learn.

It can work smoothly with other languages and can be used in a huge variety of applications.

No copy or equal method is available in JavaScript.

Owned by the Oracle Corporation, Java is one of the oldest, most common, in-demand computer programming languages in use today. Well, think of some of your favorite web apps and games. It’s highly likely that Java plays a huge role in the code that makes them work. Another important factor which has kept Java’s magic intact among web development companies is its independence from platforms. This helps developers to essentially “write once, work anywhere”(WORA). Java is everywhere and the demand for strong developers is literally high.

Memory management in Java is quite expensive

The absence of templates can limit you to create high-quality data structures.

Developed by Apple in 2014, Swift is a general-purpose, open-source language built using a modern approach to safety, performance, and software design patterns. It was developed as an alternative to Objective-C to write applications for iOS and Mac. Deeply influenced by Python and Ruby, Swift was designed to be beginner-friendly and fun to use. This makes it one of the contestants of this top 10 programming languages list.

Created: Swift was developed by Apple in July 2010 so that iOS developers do not need to work with Objective-C.

The Swift program codes are near to natural English, so it is easy to read

The language does not have a long code line.

With the continues updating of swift versions of Apple, Swift is somewhat unstable

Developed by the tech giant Google itself, Go is one of the latest players in the programming platform. It is an open-source language that makes it easy to create simple, secure, and productive software. It combines the best aspects of functional and object-oriented programming, as well as features a valuable set of inbuilt development tools.

Created: Go language which is also known as golang is developed at Google in 2009 by Robert Griesemer, Ken Thompson, and Rob Pike.

Its syntax is small compared to other languages, and it's easy to learn.

Created by Microsoft, C# is considered to be one of the most powerful programming languages in the Dot NET framework. It is a powerful, flexible language that gives you a comprehensive programming foundation that is applicable to Java, Objective-C, PHP, and more. You can think of C# as a blend of the C++ and the Java language but Anders Hejlsberg, the creator of C#, says the language is more like C++ than Java.

Year Created: C# is a computer programming language. It's the first version released in 2001.

Fully integrated with the .NET library which provides access to a repository of functionality and support.

Safer than its namesakes (C/++) as pointer types are not permitted

It allows pointers in 'unsafe' blocks

Created: C++ is a programming language that was developed by Bjarne Stroustrup in 1983.

It is a popular language, and thus, there are many compilers and libraries

Other programming languages like C, C#, and Java have a very similar syntax to C++, make it easy to learn for everyone who knows C++.

No garbage collector is running in the background.

The syntax is complex, and the standard library is small, making this language very difficult to learn for the beginner programmer.

The object orientation system in C++ is unnecessarily basic compared to other languages.

Being one of the powerful high-level programming languages, Scala incorporates functional programming and object-oriented programming concepts. Scala stands for scalable language and is one of many attempts to “rewrite Java” while improving its drawbacks. It tries to make Java more functional by offering advanced features like string comparison advancements, pattern matching, and mixins.

Created: It was created and developed by Martin Odersky. It was officially released on January 20, 2004.

If you're from the language like Java or any object-oriented language, the learning Scala will be more familiar than learning languages like Haskell

Quite a good IDE support(Intellj IDE with a plugin), while other functional languages community normally favor editors like Emac or Vim

If you're panic at solving the problem in an idiom functional way, you can always get back to the object-oriented area, Scala still offers a mutable collections library for each of their immutable counterparts.

It has tools like Spark for doing large amounts of data analysis and also has some large company to support it(like twitter).

It's not as Functional as a language like Standard ML, F#, Haskell

The hybrid of object-oriented and functional make some concept an intuitive to understand, and sometimes make the type pieces of information a little hard to understand.

Kotlin, the Google-endorsed cross-platform language that is meant to interoperate entirely with Java and run on the JVM. Lately, it has become the most-beloved programming language among developers, according to a Stack Overflow survey. One of the most critical factors behind Kotlin’s increasing momentum is its smooth compatibility with the Android Studio 3. In the year 2017, Google declared Kotlin as the official language for android app development. Which is why you will find Kotlin in almost all the top 10 programming languages lists.

Created: It's developed by JetBrains. The project started in 2010 and was open source from very early on. The first official 1.0 release was in February 2016.

Received a lot of attention from the Android community and the bonus point is that it can also be used in the backend development like Spring 5.

Developers are privileged to make use of the Anko Library and currently, there are over 2000 Kotlin projects on Github.

If you intend to make a switch from Java to Kotlin then it is easy. The process is short and sweet, Install Kotlin Plugin, add the plugin to the Gradle build files, and then select convert. You are done. It’s this simple and easy.

The developers can now build cleaner APIs by including the smart extension functions.

One of the major pros of Kotlin is that it works well with Java. The developer can create new modules with Kotlin and you can rest assured that it will work well with existing Java code.

The learning takes increased time as the language is comparatively new and challenging and also the language has a concise syntax.

The developer community for Kotlin is really small and also the answers to all the queries are not available on the ground of the language is new.

Ruby is one of the most popular languages, developed in Japan in the mid-1990s. Is a dynamic language which was constructed with an aim to simplify the programming task and making it more fun. Its popularity is bolstered on Ruby on Rails, a full-stack web application framework that runs Ruby. The downside of Ruby is it that, being a dynamically typed language, it is not very easy to maintain and its flexibility makes it’s slow.

Created: Ruby, the programming language, was named after a valuable gemstone by Yukihiro “Matz” Matsumoto in 1995.

RoR is easy to learn. It is a truly object oriented programming language with quality code.

RoR comes up with rich libraries, which helps in better results with less work and time.

The Fluid readability of Ruby makes it more faster to scan a region of code and acknowledge specifically what it is doing.

Database migration is the additional feature of RoR for easy and fast development.

Ruby on Rails goes hand in hand with “Agile” methodology.

Cons:
These are dependable on various factors and dependencies of gems you’re using. When compared to other languages like GoLang or NodeJs you can face these limitations but it’s not a downer that will stop you from going for ROR


Conclusion
This concludes the list of top 10 programming languages you should learn in 2020. Ultimately, it’s you who have to decide on which programming you want to learn. So, take your time in weighing each option and choose accordingly. More importantly, make sure to hold a good command over the language that you choose for programming. Until then, enjoy coding!


Make sure you practice as much as possible and revert your experience.

Got a question for us? Please mention it in the comments section and we will get back to you as soon as possible.

How to Put Images Side by Side in Blogger (Easily)

There are multiple ways to identify fonts on Android